Born in 1937 in Houston, Texas, Edwards studied at the Los Angeles County Institute, Los Angeles City College, and received his BFA from the University of Southern California, Los Angeles. In 1972 he joined the faculty of Livingston College of Rutgers University and in 1980 he became professor at the Mason Gross School of Creative and Performing Arts also at Rutgers University. Melvin Edwards is a three-time recipient of the National Endowment for the Arts award for sculpture and was twice awarded a Fullbright Fellowship to travel to Zimbabwe. He has exhibited widely in the United States and abroad. His work is in private collections as well as in the collections of numerous museums including The Metropolitan Museum of Art, the Museum of Modern Art, the Brooklyn Museum of Art, and the National Museum of American Art, Smithsonian Institution. 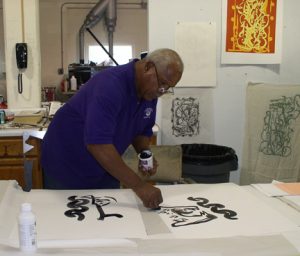 Edwards working on a print in the studio.