William T. Williams received his Bachelors in Fine Arts from Pratt Institute in 1966, and his Masters in Fine Arts from Yale School of Fine Arts, Yale University in 1968. Born in Cross Creek, North Carolina, 1942 he is now a resident of New York City where he has been a Professor of Art at City University of New York, Brooklyn College, since 1972.His works have been shown in numerous museums, nationally and internationally, and are included in the permanent collections of leading museums in the country such as Museum of Modern Art, the Whitney Museum of American Art, and Detroit Museum of Art. 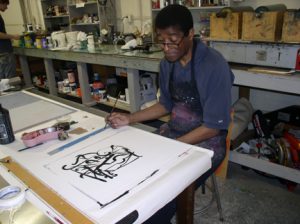 Williams working on a print at the studio.