Sam Gilliam was born in Tupelo, Mississippi in 1933 and grew up in Louisville, Kentucky where he received an M.A. in painting at the University of Louisville in 1961 and also an honorary Doctorate of Humane Letters at the University of Louisville in 1980. Gilliam’s recent work has its origins in paintings he made in the early 1980’s when he was raking huge quantities of acrylic paint and gel across a large canvas, then cutting the canvas into fairly regular geometric shapes and then put them back together in an almost improvisatory way. In 1990 Gilliam had occasion to execute a number of actual sculptures; some of them against a wall and some suspended in space. His works in the 1990’s marry sculpture to the painting in the former and extending the latter. They combine shaped canvases no longer quilted but still patterned with raked masses of acrylic and gel with cut out aluminum elements, circles, broken circles and perforated cones. His public commissions, solo and group exhibitions have ranged in location from Georgia, to California, to New Jersey, to Florida, to New York, to Louisiana, to Germany, Chile, and Japan just to list a few. In October, 2005 his first major retrospective open at the Corcoran Gallery, Washington, DC and will travel until 2007. 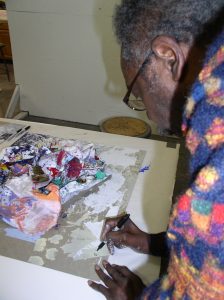 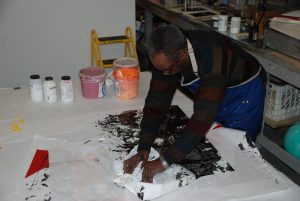